Now scheduling Virtual Appointments within 72hrs for all people across Pennsylvania! Contact Us today for more info.

If you are a parent or have experience working with children, you’ve likely witnessed tantrums.  Tantrums or outbursts may be triggered by a variety of things, including being told “no,” an inability to do something, transitioning away from a preferred activity, hunger, tiredness, losing a game, etc.  During a child’s period of poor emotional control, it can even be challenging for adults to maintain a level head to aid children in returning to a calm state.  Many times, adults may try to rationalize with a child’s emotions.  “Just calm down!  It’s not that big of a deal.”  You may have noticed that even with the threat of a consequence or the promise of a reward, the child’s behavior doesn’t change and may even escalate further.  The lack of success in trying to rationalize with a tantruming child comes down to brain development.   The part of the brain in charge of controlling one’s emotions, the “upstairs brain,” continues maturing and developing up until about 25 years of age.  Because of this, expecting a young child to fully control their emotions is setting an unrealistic expectation. During periods of strong emotions, the “downstairs brain” or “feelings brain” becomes activated and takes control.  This is the part of the brain in charge of our automatic responses, such as our fight, flight, or freeze response.  Meanwhile, the “upstairs brain” or “thinking brain” becomes deactivated and is not able to process the ideas of consequences, rewards, or logic.  In order to bring a child back to a calm emotional state, the “downstairs brain” needs to be soothed to allow for the “upstairs brain” to act.  This process could include the use of deep breathing, squeezing a stress ball, squeezing putty, going for a walk, singing, hugging, listening to music, drawing, coloring, exercising, getting a drink of water, or even getting a snack (many of us know what it’s like to be hangry).  Once the downstairs brain is soothed, the upstairs brain regains control and is able to process information.  This presents an opportunity for a calm discussion about the trigger and what can be done differently next time. There are many ways to aid a child with learning to control their emotions and actions.  Some recommendations include:

Although eliminating a child’s tantrums entirely may not be possible, these strategies can aid in reducing the intensity and length of tantrums. It’s never too late to try a new strategy. Every child is unique, and what works for one child may not work for another.  Embrace the freedom to think outside the box to determine what helps both you and your child with controlling your emotions. 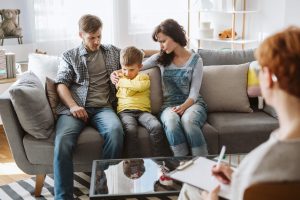